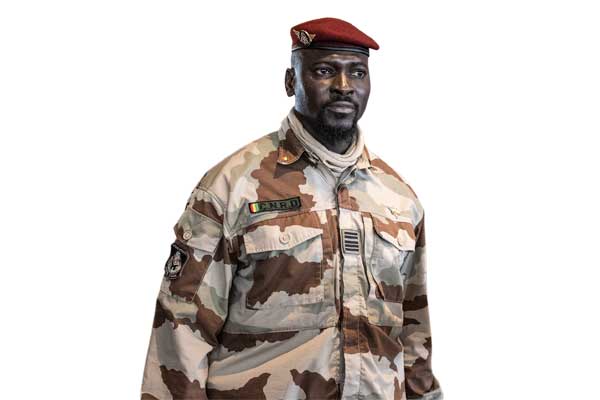 Three weeks ago, on September 5, Guinean President Alpha CondÃ© was deposed by the country’s armed forces in a coup led by the Special Forces Commander, Lieutenant-Colonel Mamady Doumbouya.

On Tuesday, a section of the military in Sudan attempted to stage a coup, but within hours the government in Khartoum foiled it.
From January 1956 to December 2001, there were a total of 80 successful coups d’Ã©tat in Africa, 108 attempted coup d’etats and 139 reported coup plots, with roughly half of all coups. State and coup attempts from West Africa.

Coup attempts also took place in Benin, Central African Republic, Chad, Libya, Democratic Republic of Congo, Comoros and Eritrea in 2013, Libya, Gambia and Lesotho in 2014, Burkina Faso and Burundi in 2015, Burkina Faso and The Gambia. in 2016, Equatorial Guinea in 2017, Gabon and Ethiopia in 2019, and the Central African Republic in 2020 and 2021.

Whenever a military coup succeeds in Africa, naturally the head of state of each continent thinks a little uncomfortable that night.
But one in particular seems to have taken Guinea’s coup a little more personally than most other African leaders.
This head of state of a country called Uganda wrote a long missive published on September 15th.

He opened in a rather defensive tone:
â€œThe military coups that have taken place in Mali and Guinea must be evaluated by African freedom fighters so that we properly take a principled position. ”
President Museveni then retraced the African liberation and independence movement over the past century.
Naturally, he was selective and cautious in distinguishing between what he saw as illegitimate and counter-revolutionary takeovers by army officers and a â€œprincipledâ€ overthrow of governments that were to be overthrown.

His letter ended with a certain irony that would make many Ugandans smile: â€œLong live the sovereignty of the African people through free and regular elections of one person, one vote, by secret ballot.
President Museveni’s conclusion about free and fair secret ballot elections partly reveals why Africa is so prone to military coups.

General elections, so blatantly flawed and categorically not free and fair, are held regularly, causing frustration to build up in society, and the state feeling uncomfortable, crushes the pockets of the media, civil society and political opposition, further compounding this frustration. and in some cases it explodes into a coup or attempted coup.

Or as Michael Twaddle, a researcher at the School of Oriental and African Studies in London, put it in a 1972 article on Idi Amin’s coup d’Ã©tat on January 25, 1971: â€œIt seemed to be a general pattern in post-colonial Africa; The British colony has become a parliamentary regime, the parliamentary regime becomes a one-party state, the one-party state is overthrown by the army chief when he becomes excessively repressive, tribalist and corrupt.

From 1979 there was a new pattern of military coups in Africa, with junior army and air force officers planning and executing coups that, by the 1960s, had been led by army generals.
Staff Sergeant Samuel Doe in Liberia in 1980, Flight Lieutenant John (“Jerry”) Rawlings in Ghana in 1979 and Major Pierre Buyoya in Burundi in 1987 and, of course, in Guinea this year fit this profile. , as well as many others.

In Uganda, Major Patrick Kimumwe in June 1977 and Lt. Col. Peter Oboma in August 1981 were the only two examples at the time of mid-level officers organizing coup attempts.
The question, then, is why are coups d’Ã©tat in Africa – particularly in West Africa – typically organized by officers with the rank of colonel and below?

Typically, in corrupt states, senior officers, from brigadier to four-star general, run departments where corruption is inevitable, such as purchases of weapons, uniforms, vehicles, drugs, construction materials. , etc.
Senior military officers in corrupt countries are the ones who make the big decisions, sign supply contracts, and are therefore more likely to amass unexplained wealth.
It is not surprising that in Uganda reports and rumors of army officers who own square kilometers of land, hotels, bus fleets and large farms are usually lieutenant-generals, brigadiers, major generals and generals.

The most senior officers will also usually be promoted because of their loyalty to the head of state or regime.
So as frustration builds up in society, officers above the rank of brigadier or its equivalent in the navy are isolated from the public good.
In this sense, junior to mid-level military officers are like their restless civilian counterparts in the media, civil society, political activists and so on, the only difference is that they are armed and trained militarily.

Why are coups d’Ã©tat taking place
For a coup to succeed, four sets of reactions are needed: angry mutineers and coup plotters; a section of the military loyal to the government or the president deploying to crush the attempted coup; another section of the security forces that is isolated from the ongoing coup, neither supporting nor opposing the plotters; then a civilian population pouring into the streets jubilant at the coup.

The specific question is then: what makes coups d’etat successful?
We can quote here the words of President Museveni, made in June 2015 in a video message that he published in response to a previous video message from former Prime Minister Amama Mbabazi, in which the latter announced his candidacy for the presidency. for 2016.
“Yes, there is fatigue,” admitted Museveni in an unusually frank and thoughtful admission.

After the total defeat of the ruling NRM party in the politically crucial central region in the January 2021 general election, then Trade and Industry Minister and Mpigi MP Amelia Kyambadde echoed the confession of Mr Museveni in 2015, when she said publicly that one of the reasons for the heavy loss in Buganda was that the people were simply “tired of us”.

Thus, â€œfatigueâ€ or sheer weariness with governments in power for decades has created conditions conducive to military coups in Africa. Public demonstrations have become the norm in some of these countries. During the riots, it is striking how much today’s young population seems to enjoy the drama.
Too many demonstrations and too many regular deployments of the army, the police and tear gas have accustomed these young people to these situations.

When riot police and soldiers shoot at or over their heads, young people, including girls, are noticed to run away not shouting but laughing and making jokes.
The same frustration with late wages, lack of money, substandard housing, disgust at almost daily reports of rampant corruption, the perception of some tribes or regions being above the law or getting most of the jobs in the country. The state is felt as much by young soldiers, police officers, prison officers and intelligence officers as the rest of the population in which they live and interact.

Besides, the military and the police are not like civilians. Crowds of angry civilians may gather in the streets to protest, but a few AK-47 shots fired into the air cause them to run for cover.
Soldiers have weapons, they are used to the sound of guns, artillery and tanks fire, can tell the direction of fire, and can tell how the trigger of a machine gun is held if it is a threat. or not.
In other words, when infantry and police get angry and decide to take to the streets in a full-scale mutiny, they are unlikely to panic and run away at the sound of a few gunshots. .

As this writer stated in the Sunday Monitor several weeks ago, what may have so far prevented uprisings against some governments by the armed forces is that most of the high-ranking officers are doubling down. businessmen and therefore feel reluctant to change the status quo.
The section of the army most likely to confront the coup plotters or mutinous sections of the armies are the special forces, which constitute the presidential guard in many African countries.

But then it was the Guinean special forces that recently organized the coup and, in 1971, it was the elite and mechanized regiment of the army, Malire, which organized the coup that brought Major General Idi Amin to power.
In short, the only reason there has not been a military coup in some countries is simply because there has not been one. Everything seems impossible until the day it happens.

Story
Coup attempts:
There were coup attempts in Sierra Leone, Ivory Coast and Comoros in 2000, Central African Republic (CAR), Comoros, Burundi and Ivory Coast in 2002, Mauritania in 2003, in Chad, Democratic Republic of Congo and Equatorial Guinea in 2004, Madagascar and CÃ´te d’Ivoire in 2006, Madagascar in 2009, Guinea-Bissau and Madagascar in 2010, Democratic Republic of Congo, Guinea-Bissau and Niger in 2011 , Mali, CÃ´te d’Ivoire and Sudan in 2012, Benin, Central African Republic, Chad, Libya, Democratic Republic of Congo, Comoros and Eritrea in 2013, Libya, Gambia and Lesotho in 2014, Burkina Faso and Burundi in 2015, Burkina Faso and Gambia in 2016, Equatorial Guinea in 2017, Gabon and Ethiopia in 2019, and CAR in 2020 and 2021.